“Sex using force” in Timor-Leste – the perils of survey questions 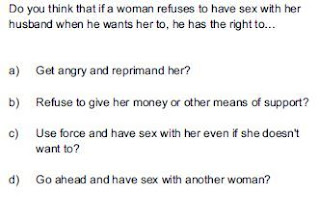 My last post on domestic violence and marital rape attracted lots of interesting comments. Some points made are valid, others are red herrings, and I have already addressed many in the comments section. I don’t have time to cover everything here, but I will address the most important point, which is the reliability of the data with regard to language and understanding.

First however, I must clearly state that I make no apology for ‘sensationalism’. My blog post was primarily about violence against women, which is a serious problem in Timor-Leste and needs to be talked about more. Yes, there is some good news in there too, and I will write further posts about that, e.g. Timor-Leste appears to be on-track for the water supply MDG. But that blog was about violence against women: so, to the survey questions.

A survey designer has a lot of control over how questions are supposed to be asked by the enumerator (i.e. person carrying out the survey), and the response options that are given. However, the designer can never be completely sure how the enumerator (i) asks the questions in practice, or (ii) interprets the response. Furthermore, the enumerator cannot be sure whether the respondent has (i) understood the question, (ii) given a truthful response. These are the perils of surveys, but we have to live with them – they are the only source of important demographic data.

For this reason, a lot of effort goes in to training the enumerators (i.e. the people who do the fieldwork) to ensure they fully understand the questions. It is clear from p.6-7 of the DHS 2009/10 (click here to download) that they took pains to:

We can assume that the questions were asked in whichever of Tetum or Bahasa the respondent was more comfortable with, but this is still problematic (see language post). According to the 2004 census, 43% of Timorese speak Bahasa, and 91% Tetum of some kind (but only 46% Tetum Prasa, the Dili version). We cannot therefore be sure that all respondents understood all the questions perfectly. Did the enumerators pass over households that spoke neither, use a local translator, or do something else? However, we can be sure that with language being such a problematic issue in Timor-Leste, the training will have tackled these problems head-on and proposed ways around them. This is why I accept the data as presented.

[Update 28/2/11 – I worked out a way around one of the language issues. We can safely assume that men with at least primary education can understand either Bahasa or Tetun, at least to the extent required to understand the below question. Using the table published in the report, it is easy mathematically to isolate only those men with greater than primary or greater than secondary education. Ignoring the differences across districts for a moment, we find that that on average across the country, those with greater than primary 1 in 7 agreed, and with greater than secondary 1 in 8 agreed. The rest of this post has not changed.]

Now, to the controversial question, which you can read on p.389 of the survey (link here again). “Do you think that if a woman refuses to have sex with her husband when he wants her to, he has the right to use force and have sex with her even if she doesn't want to?” The question is unequivocal about (i) him wanting to, (ii) her not wanting to, (ii) the use of force.

Want and force are simple concepts, not e.g. complicated names of diseases or health issues, which are often a source of confusion in DHS surveys. The options for answers are “yes”, or “no” or “don’t know / depends”. In the survey report we are only given data on “yes”, so we cannot infer the split between “no” and “don’t know / depends”.

It is notable that the answers to this particular question show significant variation between districts. More than 30% of men in 3 districts (Baucau, Bobonaro and Covalima) said “yes”, but in 6 other districts less than 5% said yes, with the other 4 districts falling somewhere in between. This might lead us to suspect that the question was not universally understood in all districts.

It might be worth investigating these kinds of problems regarding other survey questions. The only other such example that I have looked hard at is the data on diarrhoea on p.139. Reported rates of under-5s having diarrhoea in the last two weeks are unusually low in 3 districts. Furthermore, some findings are counterintuitive, with mother’s education apparently contributing to higher diarrhoea incidence.

In conclusion, I should state that I stand by what I wrote, which was merely commenting on published government data. I was not saying that all Timorese men are rapists. Violence against women is a big problem both in Timor-Leste and in other countries around the world. It needs higher priority.